In November, AVANCE-Houston said a bittersweet goodbye to teacher aide Cristina Rodriguez. In 2014, Cristina and her husband Gael enrolled in the AVANCE-Houston Early Head Start program while she was pregnant with their daughter Aria. Two years later, they were recognized at the AVANCE-Houston annual luncheon with the Exemplary Family Award. Cristina has since learned to speak English and was hired as a teacher aide for the same program that initially brought her family to AVANCE.

Cristina and Gael now have three children and opened a construction company, which recently landed a major contract that enabled them to hire over 10 employees. Cristina left her position with AVANCE to help with the administration of the family’s company. Both Cristina and Gael expressed gratitude to AVANCE for its programs and guidance. To see why the AVANCE-Houston team is so proud of the Rodriguez family, you can read the 2016 profile below or watch a short video about their journey on YouTube. And be sure to visit www.avancehouston.org for more information on the great work being done by AVANCE-Houston.

The following profile originally appeared in the program for the 2016 AVANCE-Houston Luncheon. 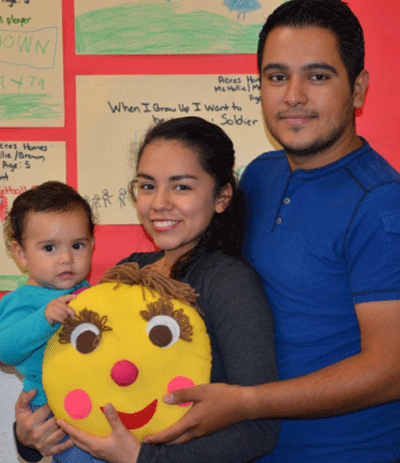 The Rodriguez family received the AVANCE-Houston Exemplary Family Award in 2016.

Gael and Cristina, both 23 years of age, married in 2014 and that same year, Cristina attended the Early Head Start (EHS) program while pregnant. The program helped her prepare for motherhood and she enjoyed the experience of meeting other mothers; which she found extremely helpful as she had just recovered from a serious health condition. Upon completing EHS, Cristina enrolled in the Parent-Child Education Program (PCEP) bringing their newborn daughter, Aria, along with her. Her husband, Gael, was busy working during the day as an administrator for a landscaping company. However, he always enjoyed hearing about the parenting tips and lessons his wife learned in the classroom. After completing the PCEP program, Cristina took home all the toys she made in class for their Aria, and that, sparked Gael’s interest to join AVANCE.

The young couple enrolled in the Healthy Marriage program, which benefited their relationship in countless ways. “Seeing that other couples face similar challenges like we do, gave me a sense of relief; and most importantly, we learned to show love towards one another even more,” both agreed.

Seeking to become the best father possible, Gael later enrolled in the Fatherhood program, and found it very helpful. “I know that I share equal responsibility with my wife to raise and educate our daughter, and I always want both of them to see me as a good father and a gentleman,” said Gael.

The program also inspired Gael to get more creative during playtime. “Sitting comfortably on the floor with Aria and Christina playing tea-party and brushing dolls hairs is one of the best rewards of being a dad” he adds, as he expressed hope that one day he will have the opportunity to teach a Fatherhood class himself.

Next steps for the couple: purchasing a home and pursuing higher education. Cristina is currently enrolled in the AVANCE ESL classes, while Gael is looking forward to enrolling in college and earning a petroleum engineering degree.

The Rodriguez family has high aspirations for their future, and they are on the path to success!